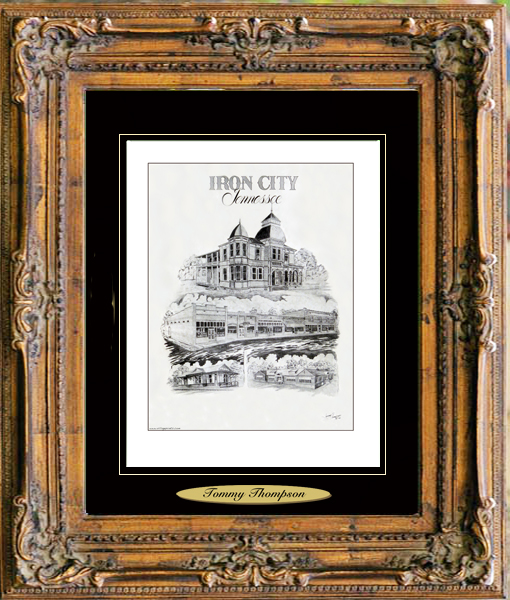 In 1984 artist Tommy Thompson was traveling through a small town called Iron City, Tennessee.  When he stopped by one of the stores for a soft drink, he was amazed at the town pride that he heard in the voices of the old men sitting around a pot-bellied stove in the store. After listening some more, he learned that a community group needed a fundraiser to help refurbish a park along a creek that ran through the town. The people in the general store, through their descriptions and recollections, helped the artist capture in a pencil drawing the essence of the buildings that had long ago been torn down. The project was quite successful, selling all prints in a month or so, to benefit the small town. From that spark, the artistic team preserved the memories of bygone days for more than 300 towns in twelve states across the South.

For more than 20 years, Thompson and his two daughters, Michelle and Melanie, preserved small-town Americana for posterity in their drawings. Check out the newly redesigned Village Prints web site to see if you can find the place of your roots.

In their travels as painter, photographer, and writer, Tommy and Marie Thompson have met some very interesting people. In Franklin, TN, they met M. L. Rose, the author of the new book, The Road to Eden’s Ridge. In a conversation with Tommy Thompson, Rose learned of his original career as an illustrator. She was fascinated with the artist’s concept for the unique business that has preserved memories of the past for many Americans who grew up in small towns across the South. Rose advised Thompson to promote vigorously his unusual web site because, she said, in an economic downturn Americans want to reminisce about their roots–the place where they grew up.